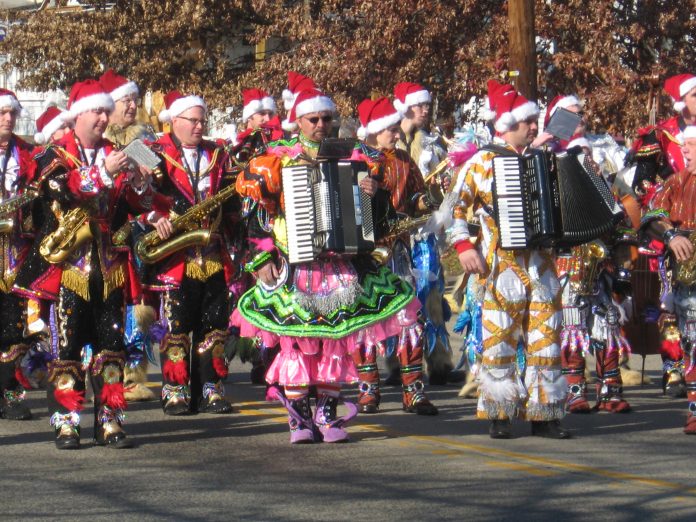 Planning for Collingswood’s 2019 Holiday Parade began the moment the last float crossed the end of the parade route in 2018.

Now in its 31st year, the annual event has continued to expand, all made possible by a team who work year-round to make it a success.

“It’s a lot of work. There’s a great core of volunteers who, when a parade ends, start doing their post-mortem about how they can make it better,” Mayor Jim Maley said. “They immediately start reaching out to schedule bands, groups, dance teams – it’s a heavy-duty administrative effort.”

Brett Wiltsey is one of those volunteers. He’s been working with the committee for more than five years and is in charge of organizing the nearly 40 volunteers who work to make the parade go smoothly.

“It’s been going on a long time, so to some degree, you want to go along with what’s working,” he said. “The first thing we do is we try to make sure that we have a nice mix of exhibitors and bands. The people attending the parade like not only the size of it, but also the variety of different exhibitors in the parade.”

The parade, which is a signature event during the borough’s post-Thanksgiving, holiday-kickoff weekend, got its start when a similar parade ended. The United States Junior Chamber, also known as the Jaycees, used to run a holiday parade through Collingswood and Haddon Township, according to Maley. When the group decided to stop hosting their parade, the people of Collingswood decided to start their own.

“It evolved over time into what’s certainly one of the biggest parades in South Jersey, period,” he said.

Since its inception, the holiday parade has expanded exponentially, making it the massive crowd-drawing event it is today, and that takes a lot of collaboration, fundraising and dedication to continue that trajectory.

“During the event, we have volunteers organizing exhibitors, on Haddon Ave., making sure kids stay out of the street and making sure Haddon Ave. remains open for the parade to flow through,” Wiltsey said. “Then it’s a matter of making sure the parade goes smoothly. We want it to be a tight parade without any breaks, so there’s always some activity for everyone to see.”

Clocking in at just about two hours with a bevy of high school marching bands, string bands, dancers, entertainers and floats sponsored by local community groups and businesses, the parade runs down Haddon Avenue, beginning at 10 a.m. from Zane Avenue. It also will include cars from the Original Garden State Corvette Club, dozens of motorcycles and other vehicles and a visit from the Phillie Phanatic, along with other local sports mascots.

At the end of the parade each year, Santa rides in on the back of a fire truck, welcoming the holiday season.

Maley and Wiltsey agreed that one of the best parts about the parade is how it brings the community together.

“Thanksgiving weekend is absolutely spectacular in Collingswood,” Wiltsey said. “There’s activities all weekend. The borough does a great job of really making that a festive weekend full of community involvement.”

Collingswood’s holiday kick-off weekend, which Maley affectionately calls “Holiday-a-rama,” begins Friday evening with a tree lighting ceremony – in which Santa descends from the roof of borough hall via firetruck ladder – and continues with the parade Saturday morning.

“It also kicks off Small Business Saturday, so a lot of people come up for the parade and they get to hang out in our business district for the official start of the shopping season,” Maley said. “You’re not going to find anything of this size and magnitude, especially in South Jersey. It’s great family fun.”