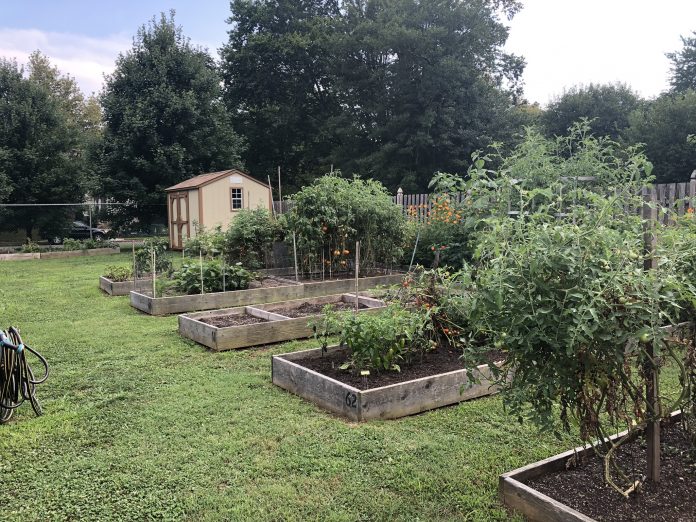 “What’s so special about Collingswood is its spirit of volunteerism, and this program is very much in line with that,” said borough commissioner Joan Leonard, dubbed the Community Garden’s “patron saint” by participants. “It really gets me in my heart that we are doing things that are good for the Earth, and it’s been inspiring to me to work with the program.”

The Collingswood Community Garden has been a part of the state’s Sustainable Jersey program for several years, Leonard said, and “it’s a point of pride” the local project recently was promoted from bronze to silver status as the result of its growth and accomplishments.

Other kudos include the program’s securing blue ribbons from the Pennsylvania Horticultural Society for the past four years.

“For those participating, it’s a great place to get together and share their love for gardening,” said the Community Garden’s president, George Schroeder, a trained landscape architect who has been a volunteer with the program since its launch.

“It’s neat to see what everybody is growing, and my three kids love to come over for what has become a playground-and-botany experience.”

The program, supervised under the Collingswood Recreation Department and the borough’s Green Committee, boasts 47 plots measuring 8 by 10 feet each along East Collings Avenue between Washington Avenue, Lincoln Avenue and Maple Terrace.

Some 13 additional plots of similar size grace a stretch of Cattell Avenue at Harrison Avenue. The second garden was created in 2016 after some houses on the flood-prone patch were torn down.

When launched in 2010, the Community Garden was one of just a handful of such projects in South Jersey, but today many community gardens flourish throughout the area. Newcomers to gardening are welcome.

“We get a dozen or so new gardeners every year,” Schroeder said.

He tries to underscore for first-time gardeners that the growing season runs from spring into fall, seeking to encourage an attitude of stick-to-it-iveness among newcomers. Weeds can creep into the gardens if distracted minders don’t keep up with their plots.

Area landscaper Brian Hostetter, who serves as the program’s vice president, said he got involved when the Cattell garden was added near his home.

“I like that by participating in the Community Garden program I can be helpful in some way,” Hostetter said. “I can offer help to those who are inexperienced with gardening, and the gardens do add to the town’s greenery.”

Both gardens feature sheds for tools storage, and the larger garden also has a greenhouse for growing seedlings in late winter ahead of actual planting.

Once plants start sprouting their tomatoes, cucumbers and bell peppers, participants who desire can donate produce from their plots to a charitable pantry. Any unused plots also are tended with an eye toward producing donatable food.

Plots are assigned throughout March to existing gardeners and newcomers can come aboard starting at month’s end. “Work parties” begin in April, featuring socializing among gardeners while they collectively tend to garden pathways and other common areas.

Plots cost $35 a year and twice that for non-residents; the borough provides gardeners with water and mulch. Additional program details are available on the Collingswood Community Garden Facebook page and the borough website.

“I have a small yard, with a dog, so I didn’t really have a place for a garden and also was renting,” said Collingswood resident Caitlin Morrison, who’s leased one or more plots for the past three years. “But I did want a garden of my own, so I got involved.”

Morrison helps “coach” some of the other gardeners and usually grows tomatoes, eggplants and flowers in her plots. The flowers are useful in attracting insects to pollinate her plants and help produce fruit and vegetables.

The gardens also release ladybugs to ward off unhelpful insects.

“I have learned a lot about gardening while being a member,” Collingswood resident Bill Rowland said. “I really joined for social reasons (and) have made some of my best local friends solely from being involved in the garden.”

His wife, Patti, said “joining the Collingswood Community Garden several years ago was one of the best things my husband has gotten us involved in.”