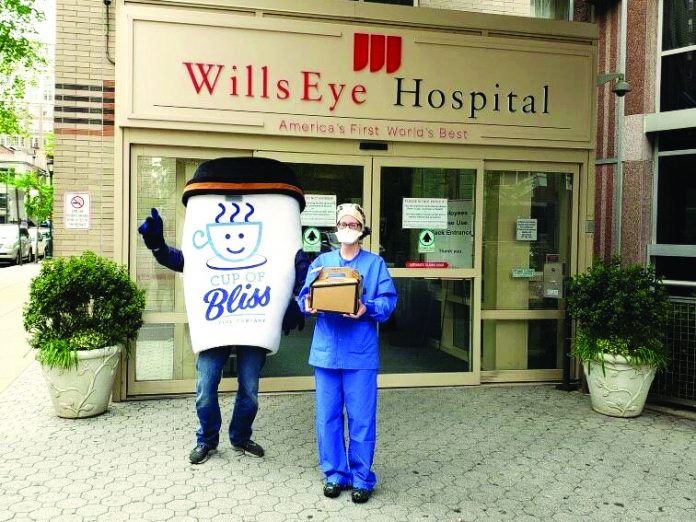 During a time of social distancing, social media hasn’t just provided people with a place to gather with family and friends, but it’s also managed to play a vital role in making connections to help those in need.

It begins with a simple act of kindness. When that act goes viral, the giving becomes as infectious as the coronavirus that brought a life-changing pandemic into our lives.

One of the owners of the family-operated Que Ricas on Haddon Avenue, Soleymani typed a 55-word message onto the restaurant’s Facebook page on the second Saturday of April. The crux of the message was this:

Absolutely no one should be hungry. If you or someone you know is struggling right now to keep themselves fed during this crisis, please send them our way!

Not long afterward, someone reached out to Soleymani and told the story of a recently-laid off co-worker. The single mom was having a trying spring that only worsened when a windstorm led to a tree crashing onto her home’s fence.

“Can you deliver some food?” the co-worker asked.

Soleymani immediately went to work, putting together a meal that included empanadas and churros. She threw in a half-pound bag of coffee from Cup of Bliss, since the shop up the road volunteered to partner up.

And then she drove to the woman’s house in Cinnaminson and left the package on the porch with a hand-written note.

“It feels right,” said Soleymani, who opened Que Ricas with her family in December. “It just feels right. It feels like the natural, human response to something like this. When I got into the restaurant business, my passion has always been to bring people together, to be a part of the community and bring it together. So it’s just an extension of that. It just makes sense to me. It feels wonderful.”

These are words that don’t just define Soleymani and Que Ricas. They are traits shared by many local restaurants in Collingswood and Haddon Township.

The best thing to come out of surviving a global pandemic is that, in our own way, we’re looking out for one another, too. Whether it’s frontline workers at hospitals and grocery stores or complete strangers that have lost a job, cafes, pubs, and restaurants throughout the 08108 zip code have united in an effort to help out those in need.

“My boss is the most kind, generous man that I have ever had the pleasure of working for, and I come from a social work background,” said Jillian Carlin-Hettinger.

Two more examples: in mid-March, instead of panicking with the realization that his own restaurant was about to take a financial hit, Marino posted a plan on social media that offered free meals to children in need of lunches with schools closing. Seven weeks later, more than 150 kids had been fed.

On the last Tuesday of April, Marino ran another promotion: a free chicken parmigiana dinner to anyone in need. Between his locations in Collingswood and Washington Township, 145 chicken parm dinners were handed out to people in the community.

“This is a time when I think it’s the responsibility of the businesses to try to help out their community,” said Marino, who sees generosity from regular customers making a 45-minute drive just to come in and support his restaurant with a takeout order.

“Normally they wouldn’t come that far for takeout, but they’re doing it to help support their favorite restaurant,” he said. “So it’s the same thing. And everyone is doing it. Whether you’re a customer coming out to support a local restaurant, or you’re a local restaurant that’s giving back to frontline workers. The only good that comes from situations like this is that everyone steps up and tries to get through it together.”

The sense of community that’s borne out of the pandemic is taking place all around us every day. The Pour House, one of four restaurants run by the same family corporation along Haddon Avenue, brings people together on Facebook each Friday by recognizing different groups of people affected by COVID-19.

With the hashtag #FrontlineFriday, The Pour House asks social media followers to post photos of the group being honored each week. One week it’s delivery men and mail carriers, another it’s hospital workers or grocery store employees. From the nominated photos, the Pour House selects three random winners for $50 gift cards to its restaurants.

“We want to make sure the community stays front and center,” said Kristen Foord, the marketing director for the PJW Restaurant Group, which has also made several stops at hospitals throughout the area with food donations. “Giving back has been a core philosophy of our organization even before the pandemic, so I think it was a natural reaction for us to find ways to continue to support our communities in small or large ways.”

For Debbie Blissick, spreading the spirit of giving comes caffeinated, with a giant, white-foamed cup of coffee mascot and M.C. Hammer’s “Can’t Touch This” blaring from a speaker.

On the second Friday of May, Blissick, the owner of Cup of Bliss Coffee Company on Haddon Avenue, crossed the Ben Franklin Bridge into Center City with a few boxes of freshly brewed Bliss coffee and her husband, who puts on the Mr. Bliss mascot suit and plays the 90s, social distant-friendly pop song upon arrival. They delivered coffee to Wills Eye Hospital, the Radiation Oncology Department at Penn Medicine, and the Labor and Delivery wing at Pennsylvania Hospital.

“I wanted to do that for Mother’s Day, since I gave birth to my daughter there,” Blissick said, adding that obstetricians have put themselves at risk since they can’t ensure their patients aren’t carrying the virus.

“For nurses and doctors, just on a normal day it’s stressful,” Blissick added. “And I imagine they have families. This virus is going around and it’s easily contagious. And then you’re going home to your family and it’s another stress level, of trying to take all of the precautions to keep them safe. So I can’t even imagine what they’re going through … So what can I do to give them one moment, one second of comfort? I think about when you drink your first sip of coffee every day when it’s really good coffee. So if I could just give them that 30 seconds. And it’s not hard for me to do, it’s what I do and what I know. It’s the one way I feel like I can contribute …  I can give them a little bit of comfort as a break with what they’re going through.”

Whether it’s a piping hot box of coffee or some comfort food in the form of chicken parm or empanadas, local businesses have stayed afloat by being open for takeout and have made their communities proud by delivering goodwill to those who need it most this spring.