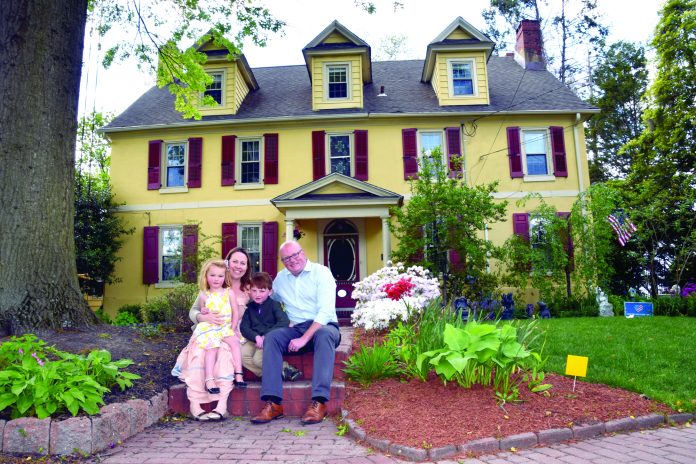 Nestled in the middle of Lees Avenue, the three-story yellow house with red shutters sits majestically behind a tree that towers over the regal roofline.

The expansive shade of the tree, however, can’t hide the grandeur of the Stokes-Lee House.

Or the history of the oldest house in Collingswood.

Built in 1707 on a hill above Newton Lake, the house was added to the National Register of Historic Places on September 10, 1987.

“I didn’t know the full extent of it, only from seeing pictures,” said owner Clare Tracy about the history she now lives in every day. “And I didn’t know who these people (the Stokes and Lee families) were until I did my research. I didn’t realize that the beginning of Collingswood was at this place here.”

The Stokes-Lee House, located at 617 Lees Avenue, was first on a plantation, and later became an inn, before a family home.

“So many are curious about the house, but only when you get closer do you see it’s on the national registry,” Tracy said, “and I don’t think people realize the names were the founding people here and the reality that this house had tons of land.

“I don’t think people actually visualize what it was.”

Clare and her husband, Ed Beitz, and their two children, Jack and June, moved into the historic Georgian and Federal style manor house in August 2016. Clare grew up in West Philadelphia and her husband is from Cherry Hill. They had been living in center city Philly.

“When we first pulled up, we didn’t realize one-third of the house was owned by someone else,” Tracy said. “We hadn’t been looking for a twin, but once we got inside we fell in love with the place and it has been no problem having the current layout.”

Originally one of the Newton Colony mansions, the house was built in two phases between 1707 and 1761.

Marlene Granitz , the president of Proud Neighbors of Collingswood, was excited to include the Stokes-Lee House on their annual house tour in 2018

“Everybody was very happy,” Granitz said.

The Stokes-Lee House welcomes visitors with a grand walkway that is flanked with white, red and pink flowers.

“The house tour was certainly fun to be on,” Tracy said. “A lot of people in town knew the family that lived here in the 1990s and I think they did a lot of entertaining, and so we met people who said they were in this house years ago.”

Jacob Stokes bought the property, which included 404 acres, in 1761 and began expansion of the original house. The Stokes family lived in the house for a few generations before selling to a farmer, George Lee, in 1828.

The Lee family sold in 1848 to William Jones, who said his kidney ailment vanished after drinking spring water from the property. Jones sold “Kalium Spring Water” from the house. He advertised the water as curing “Bright’s Disease, dyspepsia, rheumatism, dropsy and diseases of the kidneys.”

“People seem interested about the water,” Tracy said. “At one point, one of the owners was claiming there was a miracle well here and they were selling water and supposedly claiming that he had all these cures.”

The famous Collings family bought the house in 1900 and the house with two names was divided into the current two dwellings.

“A local family had bought the house, I think it was in the early 1990s, and he was the fire chief here and when he got the house it was in pretty bad condition and he did a lot of the work himself,” Tracy said. “So it was done, but we had some things we wanted to change. We redid the kitchen before moving here, but other than that it wasn’t like we needed to do an immediate renovation.”

Just to learn – and share – more of the history about their grand home.